Clubmosses in the Dragon Forest by Robin Mathews 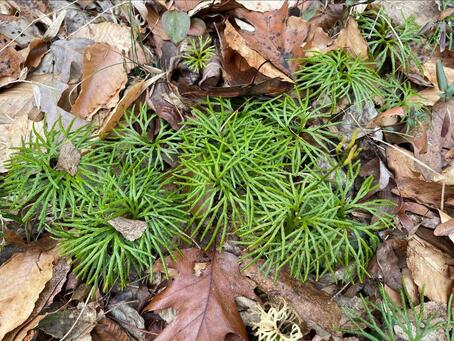 Some of the oldest vascular plants on earth can be found along the trails of the Revere and Williams property managed by FODR. Running Ground Cedar, Diphasiastrum digitatum, and Princess Pine, Dendrolycopodium obscurum, can both be found on the forest floor of the moist woods surrounding the Dragon. Because they are perennial evergreens, they provide a welcome bit of green in the winter months along with the more abundant Christmas ferns.

Clubmosses, Lycopodiaceae, evolved over 400 million years ago and there is fossil evidence of them attaining tree size (100 feet!) some 300 million years ago. It’s hard to imagine these little insignificant looking ground-hugging plants as gigantic trees!

Clubmosses reproduce via spores rather than seeds - which is the way most vascular plants pass their genetic information to the next generation. The spores are contained in the club-like strobilus which protrudes from the top of the plant. In late summer or early fall, the “club” releases spores which can become new plants given the right conditions. These spores were once collected by early photographers and magicians to be used as “flash powder” because they ignite easily and produce a bright flash effect.

Clubmosses were also often collected as Christmas decorations and wreaths in the past. Because these plants can take years to reach maturity, picking Clubmosses threatens their survival. Unfortunately, this practice does persist in some areas. At least we know our FODR property Clubmosses are safe from harvesting.
Running Cedar                                                           Princess Pine
When observing Clubmosses near the Dragon you will notice that some look vine-like and appear in long strands. These are the Running Cedar also called Ground Cedar, Crow's Claw, and Fan Clubmoss. The other Clubmoss you will see along the trail look like little trees. These are the Princess Pine also called Prince’s Pine, Rare Clubmoss, and Ground Pine. They appear to be individual little plants but they are connected underground via rhizomes.
​
These are the two Clubmosses I have observed on the Dragon trails, however, there are 12 species known to exist in Virginia. Could there be more? Keep your eyes open. You might find another species of Clubmoss in the Dragon watershed! ​
The Muskrat by Carol Kauffman
The muskrat is primarily an herbivore.  A unique characteristic of the muskrat is their specially evolved teeth.  A large space exists between the muskrat’s front incisors and premolars (a set of flat chewing teeth at the back of the mouth). This gap between these teeth is called diastema.  The muskrat can fit plant matter into these openings if it widely expands its jaw.  As the incisors protrude outside the mouth, water cannot enter the mouth because the lips seal behind them; a similar adaptation exists in the beaver.  This allows them to chew on stems and roots under water without opening their mouth!  All aquatic plants are eaten by muskrats ranging from cattails to wild rice to pickerelweed and sometimes even small fish, frogs, turtles and invertebrates when vegetation (winter) is scarce.

Chatting with a River Otter by Jeff Wright
Following the Friends of Dragon Run trash pick-up on 19 November, I went to FODR’s Wares Bridge Complex in King and Queen County to see the new trail signage and boundary markings. It was a beautiful, sunny, and crisp day so I also planned to do some birding.  I was on FODR property upstream from Wares Bridge at the site where, on the previous day, we hosted the recording of soundscapes along the Dragon. While observing a winter wren working around the base of several trees, I was shocked to see two river otters close by in the water.  My heartbeat immediately shot skyward! 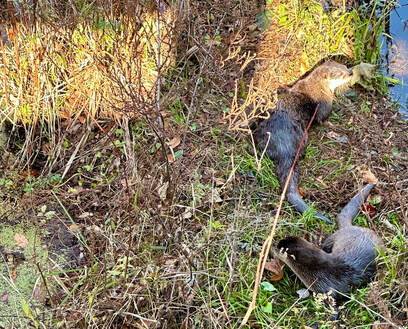 I soon lost sight of the otters as they meandered downstream toward the bridge, obscured by vegetation along the bank.  I moved to the bridge in hopes I would see them again.  At the bridge I scanned the water and edge habitats for a few minutes and did not see them. So, I reverted to scanning the trees and sky for birds.  But then something caught my eye moving (and rolling) along FODR’s property at the bridge.  Yikes! The otters were frolicking just below me about 30 feet away.   Yes, birders need to look down as well as up. I took pictures and a short video of the pair before they slipped back into the water, my heart still racing.
As we exchanged glances, I sensed one of the two cavorting otters was mouthing a thank you to FODR’s Mark Alling for managing trash pickups that keep a lot of bad stuff from getting into Dragon Run.  I was speechless but nodded my head in agreement. 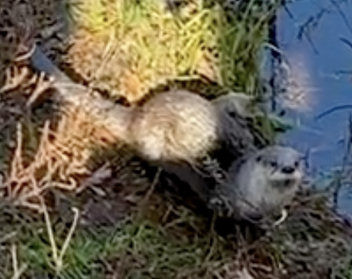 River otters have a high metabolic rate which requires a lot of food for maintaining body heat.  Body heat as well as the otter’s thick water-repellent fur was needed on this frigid fall day.  River otters eat 15% or more of their body weight each day to sustain themselves. Wow.  My estimate is that the two river otters each weighed about 15 pounds.

​Although I had seen river otters in a prior year a mile or so below the Mascot Bridge, this was the first time I saw them on FODR land and was able to get a picture.  I doubt I will ever forget seeing these otters in the Dragon.  These incredible animals, I hope, earn a place on the flora and fauna charts provided  to guests who paddle with the Friends of Dragon Run. River otters – another reason to treasure the Dragon.
Cranefly Orchid, Tipularia discolor, by Jack Kauffman 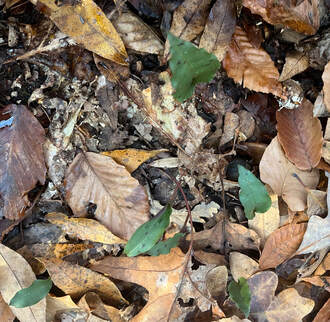 It’s always a great time to take a walk in the woods!  Hiking the upland deciduous forest around the Dragon Run in December is especially enjoyable to me in the early mornings and late afternoons.  That’s because the sun shines beautifully through the trees and onto the carpet of fresh leaves.  At this time of the year there is very little greenery on the floor of the forest.  One special exception, peeking up through the leaf litter, is the leaf of our woodland cranefly orchid.  This plant has evolved to leaf out and photosynthesize during the winter months when the sun can get to the forest floor and allow the plant to store nourishment for its summer blooming flower – after its single leaf has died off.  Amazingly it forms a single leaf in September or October that disappears in the late Spring.  The leaf top is dark green (with some dark purple spots) while the underside is strikingly purple in color. 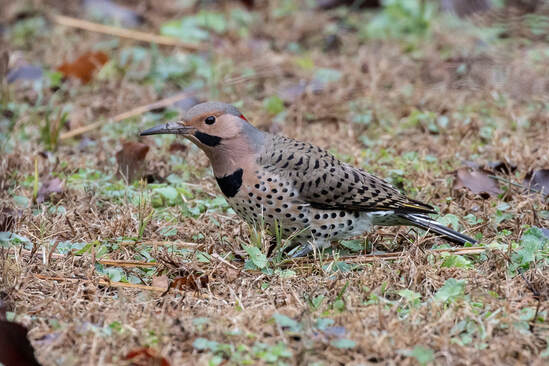 Woodpeckers (including sapsuckers and flickers) delight me as much as any other bird – they are often seen, easy to recognize and their calls are pretty easy to recognize. Of the eight types in Virginia, all but one, the Red-cockaded Woodpecker does not occur in the Dragon Run Watershed.
​
While all the woodpeckers are similar in life history, they all exhibit some differences – size, color pattern and ecology. For example, one of our upland Dragon Run species, the Northern Flicker, is my favorite, and it differs from other woodpeckers by feeding, not in trees but on the ground. It eats mostly ants by probing with their beak and using a long-barbed tongue to lap up the ants. Their tongue is the longest of all North American birds extending about two inches past the bill tip. The formic acid from the ants assists in preening helping to get rid the bird of parasites. It does eat berries and such during the winter when ants and other insects are inactive.

The Northern Flicker is a common grayish brown woodpecker native to most of North America and parts of Central America. The “Flicker”, as we call it, is a year-round resident in our area. It requires some open ground for foraging but can be found in almost any habitat with trees .

The Northern Flicker is our second largest woodpecker and with its spotted breast, red crescent on the back of its head, black crescent in its chest and the white rump, it is easy to ID. When you see a woodpecker on the ground or up flying off the ground, its undulating flight and white rump are definitive.  Flickers are monogamous and research suggest about 75% mate for life. The males are strongly territorial. There is typically one brood per year but some evidence of a second brood if first is destroyed, with the female producing 6-8 white eggs per brood. They usually return to the same nesting area and, like all woodpeckers, are cavity nesters.

The Common Persimmon, Diospyros virginiana, the Fruit of the Gods
​ by Betsy Washington